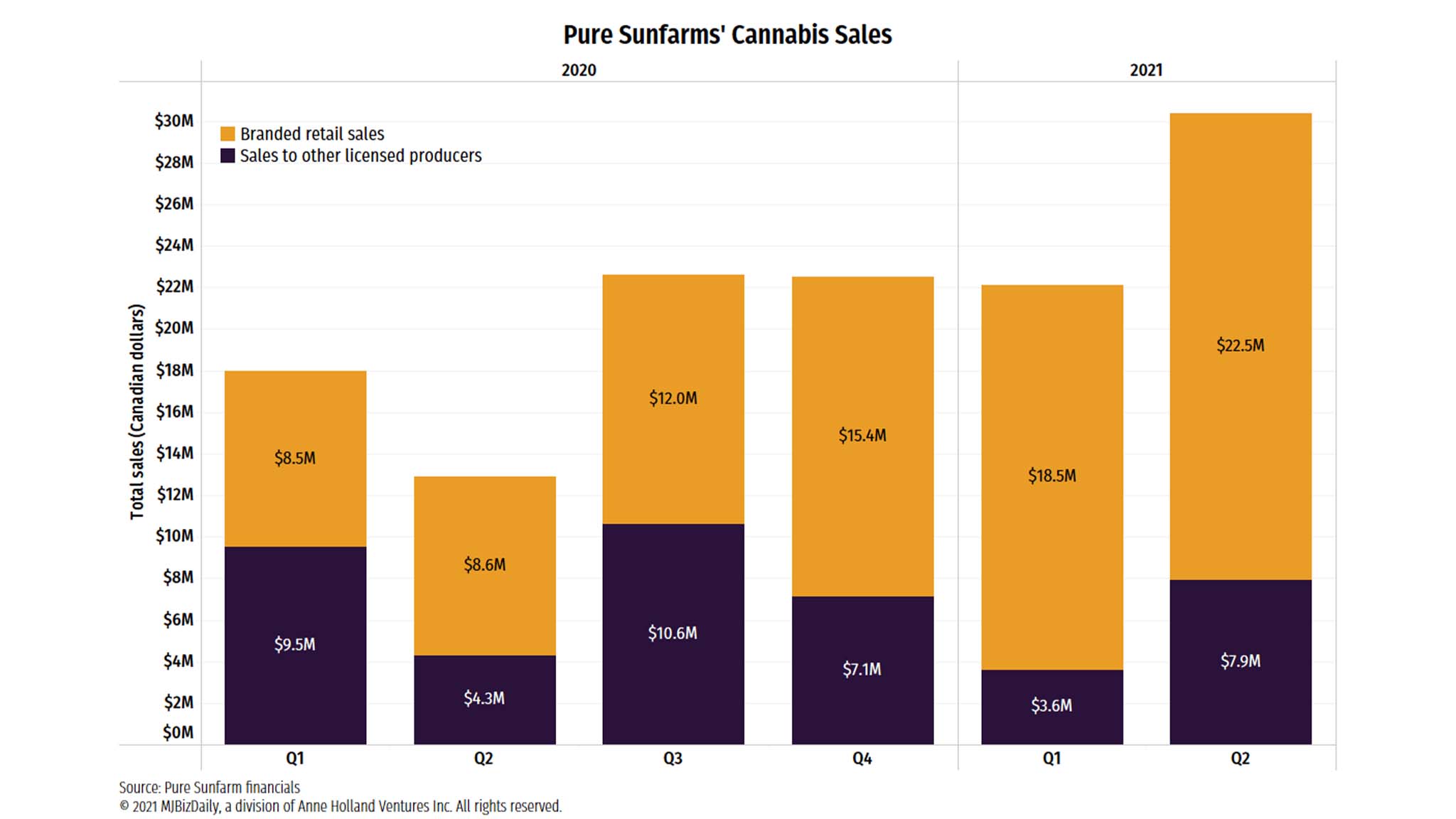 Only one large-scale cannabis producer in Canada has established a leading market position without accumulating steep losses and significant spending on mergers and acquisition: Pure Sunfarms.

The Delta, British Columbia-based cannabis company is a subsidiary of Village Farms, a Florida-headquartered vegetable grower that trades on the Nasdaq as VFF.

Pure Sunfarms is profitable if just barely, having earned a net income of $20.2 million (25.6 million Canadian dollars) since 2018.

Its major competitors, however, have lost a lot of money, even after spending lavishly on acquisitions to try to fuel growth.

Some of those major producers include:

Pure Sunfarms is besting its competitors in the one category that matters most: flower.

The B.C. grower holds a comfortable lead as the top seller of flower in Canada, the dominant category in the adult-use market.

Another striking difference between Pure Sunfarms and rival large-scale producers: Pure Sunfarms accomplished the feat largely through organic growth – not the acquisition-driven strategy, which dilutes shareholder value, utilized by other companies.

How did Pure Sunfarms do it?

“We said, ‘Let’s really understand the customer base to start with,’” DeGiglio told MJBizDaily in a phone interview. “We have to be able to satisfy that customer, who is very educated and who has been buying it for a long time.

DeGiglio said Pure Sunfarms is selling the “highest quality at an everyday price. That was able to resonate very well with the consumer, and we have never changed our strategy.”

MJBizDaily spoke with DeGiglio about how Pure Sunfarms has succeeded thus far, what it did differently and how it envisions international expansion playing out.

Pure Sunfarms succeeded in scaling its massive greenhouse where other mass producers stumbled. What did you do differently?

We started doing it 35 years ago, and that’s really important because, when you talk about scale, it took us two decades to be able to build the massive greenhouses properly, understand the technology, be able to know that these large-scale facilities in agriculture can take five years to ramp up to full efficiency.

We’re not smarter than anyone else. We just made those mistakes over three decades.

Today, when you see someone say, “We’re going to start out tomorrow with 3 million square feet,” it’s bizarre. They have no background in agriculture and no understanding of it.

Some of them have so much money they don’t care about shareholder dilution or prudent capital spending and built stuff that is so futuristic, you might see it on Mars in 20 years.

But as an efficient business, it didn’t work.

Then you look at where these folks built the greenhouses. It’s insanity. So, people were just building wherever, and it didn’t make a lot of sense. They made very classic amateur type of mistakes. I’m not being derogatory, but it’s true.

Would you consider U.S. expansion involving warrants, pending U.S. legalization, a sound strategy, given that no one knows what the laws and regulations will look like when federal laws change?

I think it’s nothing but hype and foolishness, because for me to have an option to buy a company and not even know how they’re performing in a year or two. … What does that really get me, other than a press release saying to the world, “I will participate in the U.S.?”

No, I wouldn’t do that, because I have the guns in Texas (referring to Village Farms’ wholly owned 5.5 million square feet of greenhouse production facilities).

I’m the only Canadian LP that has U.S. assets that are unmatched by anybody else, so I’m ready to go. So why would I want to do an option on someone else?

At the end of the day, (we don’t) know what the regulations are (after legalization).

I’m much more patient. I’m not going to go out and make an announcement on a warrant just to say something.

That may not even be the company we want a year from now. Who knows? There’s always so much variability.

So I think it’s a fool’s bet, but I understand why they all try to do it.

Why do they do it?

I guess they do it just to get press releases to show their shareholders that they’re doing something.

If I looked at it from a business perspective and did a SWOT (strengths, weaknesses, opportunities and threats) analysis on it, I’m sure the risks and threats would outweigh the opportunities, because you’re dealing with so many unknowns.

You’re making a bet. You may as well go to a roulette table and bet on red.

What’s your entry point to the U.S. cannabis industry?

When you look at the U.S., it could be a very different dynamic on federal legalization than it is now.

Proving out in Canada (means) it’s a lot less risky for us to ramp that up in Texas.

One thing we try to do is be very prudent and patient. Pushing it when it’s not ready to be pushed is a waste of money and time.

If Texas is not there – and Texas will either get there through legalization by the state or federally – and Nasdaq allows us to participate, we will then look at an entry point.

Our acquisition of Balanced Health Botanicals, which is a CBD type of company. … That can be one of the entry points, looking at Colorado.

We have focused so hard on Europe, and we’ve looked at the medicinal markets, like in Germany. I wouldn’t touch that with a 10-foot pole right now.

I watch our competitors burning hundreds of millions (of dollars), and never talking about it (the money).

And to your point, people say it’s a trillion-dollar global market – they always use this term “global” when (medical marijuana) is not a global market. It will be a long time before it’s global. Maybe international.

The rec side is where we shine. And if the European Union opens up on rec, that’s where we want to play. Why? Because you have a built-in consumer.

How do you assess international opportunities when there are no meaningful markets?

It would have to be very clear by the government that it’s regulated and what the playing fields are.

We’ll enter the market where there is a built-in consumer and a strong regulatory (environment). That’s what we need, and I don’t see that anywhere except for maybe one country in Europe.

We’re not going to spend billions of dollars trying to develop a consumer.

By being patient and waiting for the U.S., (we won’t) dilute our resources too much.

Because when the U.S. opens – and hopefully soon, at least from the Nasdaq perspective – we’ll focus on that, because that’s really the big market for us.

More than a dozen countries are intent on being medical marijuana exporters, but there are no meaningful import markets yet. What do you think about companies spending heavily in that area?

If I was on the board of these companies, I’d say, “First of all, what are you doing even looking outside Canada till you’re profitable in Canada?”

It’s amazing to me that these companies aren’t profitable in Canada – and have a winning, durable strategy – but yet you’re dabbling (overseas).

Cannabis companies losing money seem to get a lot more positive attention than a company such as yours, which is profitable. Does that bother you?

I believe we’ll get our due. We’ll eventually be recognized, because at some point you have to execute and you have to deliver to shareholders.

The reason they (the money-losing cannabis producers) still exist is because bankers love these guys, always coming back to the well (for) ATMs. I call it “Another Ten Million.”

I’m still the largest shareholder of Village Farms today after 30-something years. I’ve never sold one of my (founder’s) shares yet.

Until it’s federally legal, where big institutions can invest, you have the retail (investors) who are really the market.

They’re not going to drill down on Tilray and say, “Wait a second, this is not all cannabis revenue. This is distribution revenue.”

I’m not knocking them. I’m just saying you have to break down who’s truly doing it or not.

What’s the vision for Pure Sunfarms? To become No. 1 in market share?

We want to win in Canada. Our goal is 20% of the flower-market share. Whether that’s one, two or three, it doesn’t really matter so much for us.

While others are cutting back, we commissioned our second million square feet (greenhouse).

We’re very confident that over the next year and a half, we’ll be doubling our capacity and can move that.

We believe in flower. Flower rules, and it still rules.

We’ll see who falls by the wayside, and then see how we leverage that up, then focus on the U.S.

Is it fair to say your big competitors in Canada lacked discipline and vision in the past three years?

I think the only prudency I’ve seen of late is spending capital on M&A.

Recently they’ve been hunkering down, because they’ve been drunken sailors most of the time in what they’ve spent, and I just can’t believe they’re still all there.

But maybe now they’re getting a little worried and they’re starting to look at their balance sheet, and saying, “We can’t just keep raising money and diluting shareholders.”

But they have a long way to go to be profitable.

Look what they’ve paid for CBD companies. These numbers are mind-boggling.

How is Tilray worth $6 billion? And the MedMen thing – are you kidding me? Why would I do that? (Aphria CEO) Irwin (Simon) … made $18 million-$20 million last year. … Is that any way to run a business? They get away with it.

All these guys are making huge bucks, and they get away with it. The Canopy guy (CEO David Klein) made CA$42 million last year. CA$42 million!

(Editor’s note: Canopy Growth declined to comment for this story, and Tilray did not immediately respond to a request for comment.)

How many Canadian LPs have inquired about Pure Sunfarms?

Not one. Nobody has even called me in a friendly way. Not Tilray, not Canopy, not Aurora. Not one of them.

If Redecan is worth CA$925 million, what is Pure Sunfarms worth?

I wrote recently that Canada destroyed more cannabis than it sold in the first three years. What’s your reaction to that?

Most of these guys cannot grow good quality cannabis.

They hold it on their balance sheet until auditors force them to take a write-down.

I see the games – they’re waiting till they do an M&A, (then) they try to bury it in the M&A to do a write-down on inventories.

How much has been written down by the large Canadian LPs on bad quality products?

The outdoor guys, too. You can’t really grow high quality outside – there’s just too much risk.