Looking Back On 30 Years At Village Farms 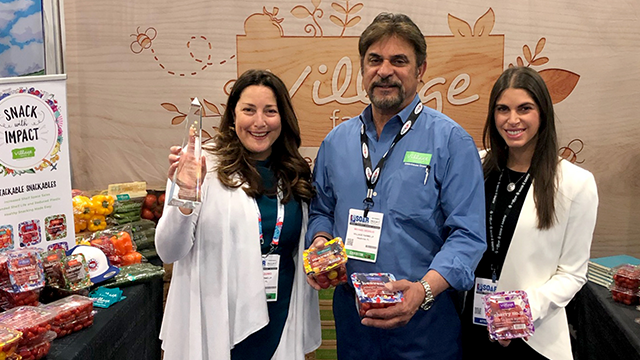 As Seen on The Produce News

If the produce industry was female the Fine Young Cannibals may have sung it best, She Drives Me Crazy, but those who have been around long enough to know when this song peaked 30 years ago have without a doubt been faced with serious challenges at some point or another in their businesses.

For Village Farms International it has been no different over its 30-year history, including a baseball sized hailstorm that took down 80 acres of glass and steel greenhouse, to near catastrophe caused by a fast-moving prairie fire, avoided, thanks to the quick wits of a handful of superhero employees.

But by far its greatest challenge according to the company’s president and chief executive officer, Michael A. DeGiglio, is something faced industry-wide on a day after day basis. “To this day I can tell you whole-heartedly there’s nothing more difficult and nerve-wracking to deal with than perishability,” said DeGiglio.

As 2019 comes to a close, Village Farms finds itself rounding out its “30 years of growing strong” as the oldest operating greenhouse grower in the U.S., and the only publicly traded greenhouse produce company in Canada. Today Village Farms has approximately 420 acres in Canada, U.S., and Mexico growing tomatoes, peppers, and cucumbers under the Village Farms Greenhouse Grown brands, majority ownership investment in Pure Sunfarms growing cannabis in Canada and ownership of majority investment Village Fields Hemp in the United States. So, as the company turns it sights to 2020 and what the future will bring, its CEO is feeling very optimistic that weathering the storms of this crazy business has been a worthwhile endeavor for more reasons than one.

It is fairly well known within the industry that greenhouse grown and specifically, Controlled Environment Agriculture, exudes a certain sense of control over the effects of Mother Nature in comparison to the challenges faced by outdoor farming. That’s a huge advantage that has helped Village Farms maintain the quality and consistency of the products they grow.

This CEA technology along with its master growers has created an assurance for Village Farms’ customers that the company is able to deliver a “four-legged stool” of a value proposition of fresh tomatoes 365 days a year to its customers. This was not always the case.

“The story I always tell is how in the early years when we were just one greenhouse in Pennsylvania and we had finished with our season, I said to my retail partner (because I only had one), ‘Ok see you next year enjoy your holidays and he said ‘Hey wait, we need more right away and we need it every day.’ From that day on this is what drove our growth strategy,” said DeGiglio.

He reminisced on the past remembering the early days. “We were on the forefront of greenhouse growing, going against the grain of the established retail supply chain field grown tomato mentality. With the ability to introduce a superior product that was available year-round we had everything to gain and nothing to lose.”

Year-round availability and the demand for products propelled greenhouse-grown from a niche market to fostering the development of large-scale greenhouse building projects for Village Farms. The company was focused on efficiency in all aspects of growing because this was the only way to compete with the lower cost of field grown produce. It developed proprietary technology and built an entirely enclosed greenhouse that was an innovative project for its time.

DeGiglio recounted the excitement of those early years and what seemed to be the birth of a whole new industry. “We were pioneers in the sustainability business,” he said. “When I began in this business my passion was growing produce in a way that was healthy, sustainable and better for the earth.”

DeGiglio remembered helping to introduce the state-of-the-art greenhouse growing medium rockwool and the company Grodan to North America back in 1985. He also recalled acutely how the challenges of raising capital and achieving profitability have never gotten any easier through all these years.

Fast forward to 2012 and the company’s most recent home run has been the Heavenly Villagio Marzano tomato. The first business to introduce a mini San Marzano to North America, it is still the exclusive grower for this authentic variety. As the perfect tomato for snacking or cooking it’s no surprise it is the category driver for specialty tomatoes.

These are just a few examples of the major progress the company has made within just one generation. “I think it’s fair to say that we helped put the greenhouse industry on the map within the U.S., not only for tomatoes, but for all produce,” DeGiglio said. “For greenhouses to take control of 85 percent of the market within the timeframe of one generation speaks volumes.”

As Village Farms moves forward it continues to have a strong foothold within the produce industry but are exploring new avenues as evidenced by their partnerships, mainly with Pure Sunfarms and Village Fields Hemp.

“We’re doing what we’ve always done just with a different crop,” DeGiglio said. “Every once in a while, maybe once in your lifetime if you’re lucky, a new industry is born. We moved very quickly on this opportunity and we’re now able to leverage our 30 years of experience and within two years have become the No. 1 brand and most profitable cannabis company in Canada.”

As the end of 2019 approaches, Village Farms International Inc. is listed on both the Nasdaq and TSX, stock symbol VFF. This year it was recognized as one of the Top 30 on TSX where the company ranked third among the top performing stocks on the Toronto Stock Exchange’s inaugural TSXD30 program.

Reflecting on being in business for 30 years, DeGiglio said there is a lot to be thankful for. “The greatest thanks I have is when I hear people’s stories from within the company. Knowing that Village Farms in some way impacted somebody’s life for the better to me far outweighs any of our other accomplishments,” he said. “Also, I’m grateful for the perseverance of the people in this company who have helped us make it through the disasters — both natural and manmade.”