CEO Reveals Why Village Farms Has An Investor Edge 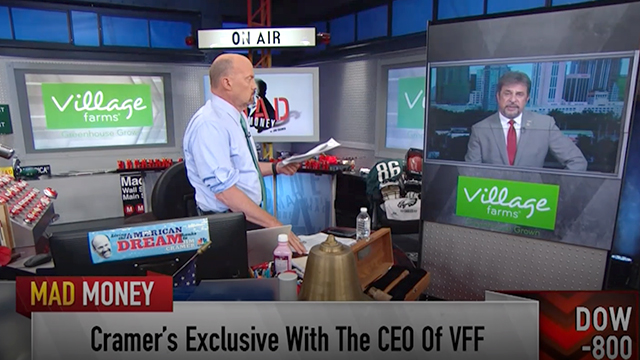 As seen on CNBC

What started as a large vegetable greenhouse developed into a pot stock.

Village Farms has been growing crops like tomatoes, peppers and cucumbers under the tutelage of founder Michael DeGiglio for three decades. The company shifted into the marijuana business a year prior to Canada’s legalization in 2018.

“For us the switch to cannabis was just, really, another agricultural crop and in that regard we saw the transformation of our assets to a much more valuable crop from produce,” the CEO said in an interview with “Mad Money’s” Jim Cramer.

Through a couple of recent joint ventures, Village Farms made its foray into Canada’s legal cannabis market and the United State’s cannabidiol, known as CBD, market. The company formed a joint venture with Canadian marijuana grower Pure Sunfarms in 2017 and Nature Crisp to cultivate CBD products in Colorado.

Village Farms operates 200 acres of grow operations in the United States and Canada. DeGiglio told Cramer he owns a 20% stake in the company. The U.S. market “gives us great opportunity to deliver unmatched results,” he said.

“I really believe in the future, so I’m aligned with our shareholders and I think it brings a different element because I’m at risk,” he said. “We want to be 80% correct that decisions we make will pay out and, in that regard, I think I am different, but it’s really about our team. We’re team-oriented.”

In its second quarter report earlier this week, Village Farms delivered earnings of 20 cents per share to top Wall Street consensus of 4 cents. The results came on $53.5 million revenue, which beat a $41.8 million estimate from analysts.

While Village Farms’ produce sales came in short, sales from the cannabis joint venture with Pure Sunfarms grew by 125% to $24.2 million in U.S. dollars.

“The cannabis in Canada as well as CBD in the US just gives us a great opportunity to deliver unmatched results, and that’s where we’re headed,” DeGiglio said.

Shares of Village Farms are up more than 300% this year and has $662 million in market cap. The stock slipped 4 cents in Wednesday’s session to close at $17.90.